In 2004, Friends Tobias Lütke, Daniel Weinand, and Scott Lake were looking to launch a website called Snowdevil to start selling Snowboarding Gear online. But the available eCommerce platforms didn’t match their requirement, and Lütke, a computer programmer, decided to create his own e-commerce platform, and Snowdevil was released after two months of development.

In June 2006, the Snowdevil creators rebranded the system as Shopify. And now you can see, wherever the phrase “eCommerce” is used, Shopify is always mentioned. You might be thinking that this is a made-up story, but it’s not.

And in this Blog, We’ll be talking about Shopify Statistics and Facts that will blow your mind. Let’s Start Then!

We need to first look at what eCommerce has developed into before diving into the data regarding Shopify itself.

Most Popular eCommerce Platforms in the world:

The Most Popular eCommerce Platform is Shopify, with a Market Share of more than 15% of almost 4 million sites using it.

Largest eCommerce Markets in the world:

Below is the Monthly Traffic of Shopify.com.

In the last three months, Shopify has had an average bounce rate of 55.50% and an average visit duration of 3 minutes, and 17 seconds.

In comparison to desktop computers, the percentage of traffic coming from mobile ones has grown dramatically over time. As a result, it is crucial for companies to concentrate on utilizing mobile experiences for their Shopify store.

In today’s era, customers are more likely to purchase directly from their mobile devices, which makes it a Mobile-First era. It is handy, and that is the reason. According to Shopify Statistics, in the third quarter of 2019, 71% of orders and 81% of traffic on Shopify stores came from mobile devices.

Now, it must be shocking for you to believe that the monthly traffic of Shopify, which is more than 50 Million is 93.95% organic. But it’s true. And these are the keywords that are bringing this high amount of traffic on Shopify. (from Shopify Statistics in 2021)

Apart from Organic Traffic, here are those keywords, from which the traffic Shopify receives is Paid.

Among all US websites employing eCommerce technology, Shopify has a 30% market share (according to BuiltWith’s Shopify Statistics). As a result, Shopify is the largest eCommerce platform in the US.

As we previously said, Shopify is home to some of the most popular and lucrative websites in the world. Let’s examine its ranking among the top three eCommerce platforms in this category to better understand Shopify’s place on the list:

Distribution of use across the Top 1 Million sites:

When we look at the top 1 million websites according to traffic, there are 2,60,046 eCommerce websites falling in that category. The major eCommerce platforms in this category’s market share breakdown are as follows:

Distribution of use across the Top 100 Thousand sites:

There are 36,228 identified eCommerce websites among the top 100,000 websites. The main eCommerce technologies in this category’s market share breakdown are as follows:

Distribution of use across the Top 10 Thousand sites:

4901 eCommerce websites have been found within the top 10,000 websites according to traffic. The major eCommerce platforms in this category’s market share breakdown are as follows:

Shopify firmly establishes itself as one of the most robust eCommerce systems in the world as we ascend the steps up and look after the top websites in the world.

Here’s a breakdown of the Country-Wise Number of Shopify Stores:

Shopify is a flexible eCommerce platform appropriate for all businesses, as you may already be aware. Online retailers from fashion to any industry are already working with Shopify. According to Shopify Statistics, more than 27% of Shopify stores are in the apparel sector, which implies that at least one in four of these stores offer clothing and other fashion accessories.

We are aware of how enamored consumers are with researching new fashion trends and making online clothing purchases. Imperatively, Home & Garden, Beauty & Fitness, and Fashion & Apparel are the three most popular Business Categories using Shopify for online retailing.

The breakdown of top business categories using Shopify is as follows.

6. Which Big Companies Use Shopify:

There are thousands of world-famous brands that sell their products and services on Shopify because Shopify is the best choice for any Company Size — Big Or Small. Also, it’s a perfect fit for all niches. And it’s good for you to know that these companies are valued at upwards of $1 billion and have partnered with Shopify Plus for their eCommerce needs.

Do you want to know which are those Most Influential Brands using Shopify? Let me tell you!

The controversial Kardashian-Jenner family’s youngest business tycoon, Kylie Jenner, has her own company, in the Makeup and Cosmetics category named; Kylie Cosmetics. Kylie Cosmetics uses Shopify Plus for its online shop in order to customize the look and management of Kylie Cosmetics. Shopify provided them with special software, in order to support the huge demand for its products.

An introduction to Redbull is not required but let me tell you that Redbull is an Austrian Company, largely known for its energy drinks, and Redbull also has a Shopify Store. Of course, Redbull does not sell it’s main product Online, but its numerous sports teams in racing and football have produced loyal fans around the world. Red Bull merchandise printed with its famous sports teams is available on its online store. From apparel to accessories, model cars to media products.

Did you know that Heinz created its direct-to-consumer online shop in only seven days? During Covid-19 Pandemic Food and Beverages Companies were impacted negatively. As the Covid-19 pandemic limited leaving the house, Heinz found that customers required additional alternate routes to get its products, notably in the UK market.

Heinz to Home was launched in the UK just seven days after signing a contract with Shopify Plus, which provided the platform with essential products online for front-liners and vulnerable populations. Isn’t it too good to get a Shopify Store ready in just 7 days?

According to Shopify Revenue Statistics, there was a 62% increase from March to April 2020 compared to the prior six weeks. After the pandemic hit, businesses switched to eCommerce, which is why there has been an increase in Shopify stores.

Shopify Statistics claims that increasing the free trial period for Standard plans from 14 to 90 days helped greatly in increasing revenue.

Over the past few years, Shopify’s revenue has consistently increased, sometimes more than doubling its performance from the year before. 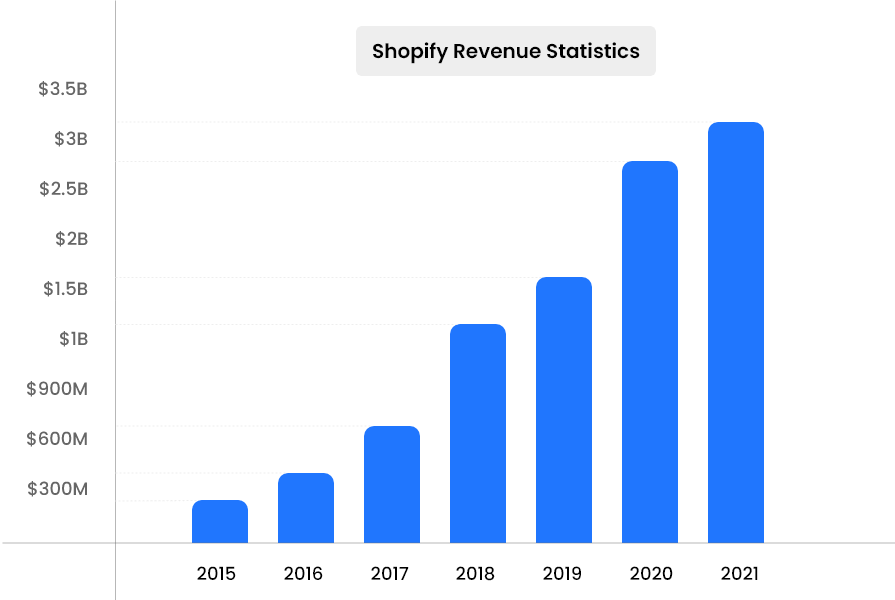 That is an increase of almost 57% year-over-year. Using the Shopify platform, retailers were able to sell goods valued $157.4 billion. Additionally, that is up 47% from the prior year.

Shopify was launched in 2006, and by 2022 it has over 3.9 Million Live Websites. And Shopify’s revenue for the First quarter of 2022 was $1.2 Billion. Which is tremendous growth. As we already told you that Shopify Stores Numbers doubled or even tripled in the era of Covid 19 Pandemic, as everyone was stuck at home, most retailers looked after giving an online presence to their business. And Shopify was the most convenient option for all of them to go with. And it resulted in annual growth of more than 200%, from 2020 to 2022.

From the Below Image, you can clear your doubts about the Exceptional growth of Shopify over the years. 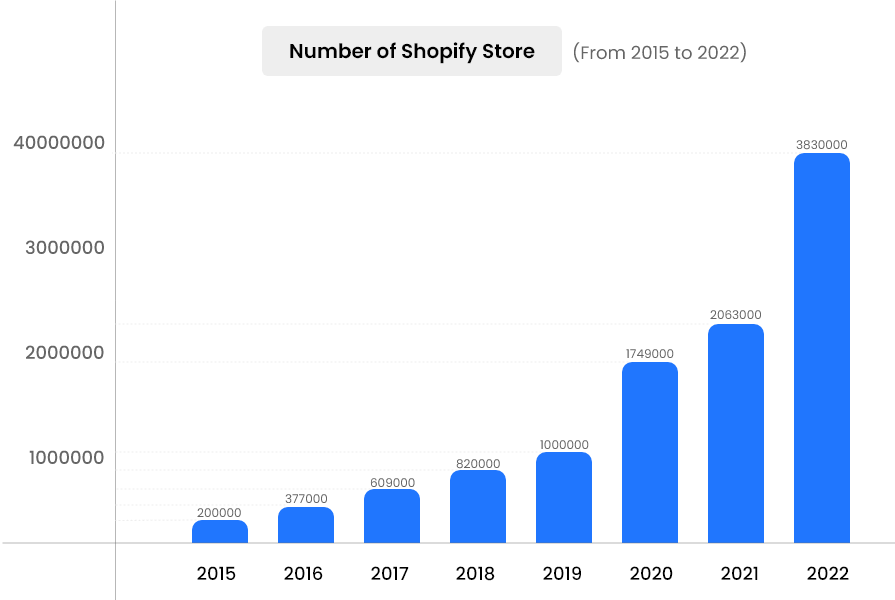 1. How many people use Shopify?

A: According to Shopify Statistics, Shopify has over 2.1 million daily active users.

2. How many Shopify Stores are there?

A: Shopify is the best choice for any Company Size — Big Or Small. Also, it’s a perfect fit for all niches. And it’s used by Whole Foods Market, RedBull, Kylie Cosmetics, Hyatt Hotels, Penguin Books, and more. These are some of the most influential brands you must have come across.

3. How many Shopify Stores I can have?

A: As per Shopify Statistics, You can only manage one Shopify store with a single user account. Well, nothing prevents you from creating additional accounts for different Shopify stores.

3. How much does a Shopify Store Cost?

A: Shopify has 3 Pricing Plans:

However, there is an additional option for Shopify Plus which can cost you around $2000/month.

6. Where is Shopify based?

A: Shopify is headquartered in Ottawa, Canada.

7. When was Shopify Launched?

8. How many sellers are on Shopify?

A: Shopify Statistics says; that the eCommerce platform Shopify has around 1.75 Million Active Sellers.

A: As per Shopify Statistics 2021, Shopify has a Market Share of 10.98% of the overall eCommerce platforms market.

10. How much is Shopify’s Annual Revenue?

11. How many employees does Shopify have?

Ans. There are over 10,000 employees appointed by Shopify to work on its growth.

So, this was all about Shopify Statistics and Facts, If you think we forget to add any, please let us know by commenting below! We would love to hear from you!

PS: We StageBit, are a leading custom eCommerce Website Design and development agency, offering the highest quality eCommerce web & mobile app development services to clients across the globe. If you’re looking to develop a Shopify Store and need any Guidance with Shopify Development, Our Shopify Developers are eager to help you.

Extra: I recently wrote this blog on Top Mistakes to Avoid While Selling on Shopify. And I thought it must be useful to you, Must check it 😉

How to Set Up and Manage Multiple Shopify Stores

Magento Development Agency VS Magento Freelancer: What is the Best Choice?